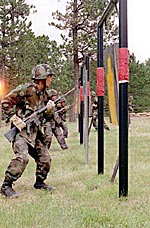 Only 5 days after I graduated high school, I entered basic cadet training at the Air Force Academy in Colorado. Getting accepted to the Academy took a lot of time and hard work during my senior year in high school. I had a 3.8 GPA and busted my ass to get into good physical shape. I had to drive 4 hours to an Air Force base where I took all sorts of physical and written exams. In addition to this, it was required to have a congressional nomination before the Academy would even begin to consider you. After writing countless letters, I got a state senator nomination.

Actually entering the Academy was a very intimidating experience. Saying goodbye to my family at the airport was a real drag, but I was also very excited. When I stepped off of the bus at the Academy, I was immediately yelled at and my head was shaved. The whole thing sucked right off the bat. I mean, this is what you expected really after watching all the movies, but actually being there was a whole different deal. The only thing that keeps you from hating life while they treat you like dirt is that you are with others going through the same hell. The camaraderie that you experience while trying to make it through each day brings out the kind of friends that you have for life.

The entire first year at the Academy is miserable. This is different from enlisting in

the military, where basic training hell only lasts about 6 weeks. While at the Academy, you are primarily working toward your four-year college degree, with all sorts of military training mixed in. I was studying Aeronautical Engineering, which was a pain in the ass in itself, but my love for flight wouldn't let me stray in any other direction. The freshman year is horrible because you are not treated like a human being. You have to walk along these narrow strips everywhere you go, following other freshmen in a line. You have to keep your chin tucked in and eyes straight ahead at all times. If you are caught moving your eyes, or "gazing" as they called it, the upperclassmen would attack you with all sorts of horrible words and then force you to suck your chin back while they count the folds in your skin. Probably the worst thing of all was "knowledge."  They issue you these books full of long ass quotes that you have to memorize word for word. When you get in trouble, the upperclassmen will give you the name of a quote and say "go!" You have to scream the entire quote word for word at the top of your lungs while jogging in place and sucking your chin in. Meanwhile the upperclassmen will put their noses right up against yours, forcing you to shove your head against the wall while staring into your eyes. And if you miss a word in the quote, you start over. I still have a lot of those quotes memorized today.

A typical day at the Academy was to get up at 5:30 A.M. to shower and clean your room for daily inspection. Then you would form up for morning meal formation with the other 4000 cadets outside on the

"terrazzo" at 6:45. They would play reveille, raise the flag, and the entire cadet wing would march to the mess hall for breakfast. Meals were without a doubt the worst events of the day for freshmen. While the upperclassmen enjoyed their meals, the freshmen would go about "business" and reciting knowledge, chins tucked in and eyes staring at the eagle logo on our plates at all times. The few opportunities you did get to eat, you could only take 7 chews before swallowing your food. And the upperclassmen were always watching. I never had a meal where I didn't get yelled at, and many times I never got to take one bite of my food. Needless to say, you got very skinny your freshman year. The remainder of each day includes classes, noon meal formation, military training and athletic events. There was an optional evening meal, but most of the time freshmen skipped this for obvious reasons. Then the rest of the night was heavy duty studying and working on projects. I had many "all-nighters."

The freshman year is by far the longest year I have ever had in my life, but eventually it ended with what is called "recognition."  This was the best and most memorable day of my life. You become a human being again. The small things are incredible, such as being able to look around, walk wherever I liked, listen to music and eat normally. No, actually I didn't eat normally at all. I pigged out and gained like 15 pounds. But I needed it. I enjoyed this new life for a few weeks before it seemed to start all over again in a gnarly course called SERE, which stands for Survival, Evasion, Resistance and Escape. It is totally confidential and I am not even allowed to talk about it. All I can say is that it simulates what would happen to you if you got shot down behind enemy lines. It is a very hideous experience and I basically learned that it is best NOT to get shot down behind enemy lines. This course lasted three weeks and I would never consider taking it again.

As an upperclassman, you basically start your life in the military and work toward your goals. My primary goal right off the bat was flight training. I started immediately and soon was a flight instructor. I flew my ass off, almost every day. I would teach the "newbies" how to fly a plane for the first time in their lives, then train them to fly solo. It was an awesome feeling to see your student progress to the point where they could fly the plane alone. I continued as a flight instructor for the next three years. I juggled this with traveling and competing on the ski team, and was having one hell of a time. In my last year, I finally got the guts up to do a parachute jump. It scared the hell out of me, but I was so glad I did it.