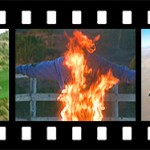 The Personal Jetpack was a bit of an accidental creation that stemmed from the development of my Jet Wing (similar to that of Yves Rossy). In the process of designing and fabricating the wing, two of my biggest concerns were operating the jet engines close to my body, and at high altitudes. The engines I am using are designed for use in Unmanned Aerial Vehicle (UAV) applications, and are thus massive at twice the thrust of those used by Yves. I was losing sleep at night thinking about these monsters screaming at 100,000 RPM and 1500 degrees F only inches away from my skin. I decided I needed to build a testbed that I could wear on my back. This turned into a much more involved project than I had envisioned, as I realized how difficult it was going to be to cram all of the necessary systems into a small space, and make it wearable. I figured if I was going to put this much effort into it, I may as well trick it out! The final result was a fairly compact jet backpack of my own design. The first test fire-up was frightening to say the least, but successful.

After a bit more testing at sea level, I needed to take the pack to 9000 feet elevation to simulate airplane exit altitude for the Jet Wing. These tests were definitely not successful, with multiple engine fires on startup. I had to go back to the drawing board on some design points, and start tweaking the computer programming to compensate for the thin air. After a few months of frustration, I eventually found the perfect combination of design parameters. The jetpack worked beautifully at all altitudes. The final test happened to be in the middle of Winter 2011, Mammoth’s biggest ever recorded, so I figured why not try it on skis:

Now realizing the potential of a small backpack capable of producing 200 lbs of thrust, I started brainstorming other applications. There were many of course, but one that immediately stood out to me was to combine it with a small speed wing and take flight. As an experienced paramotor pilot, the biggest drawback of the sport to me are the large paragliding wings necessary to safely take off and land with 70+ lbs on my back. These 18+ sq meter wings limit your speed since they have so much drag and simply convert any excess thrust into lift instead of horizontal velocity. But with the much lighter and more powerful jetpack, combined with its unique ability to vector thrust through upper body movement, I could use a wing in the 12-14 sq meter range. These “speed wings” produce far less lift and drag, allowing for much faster speeds:

These two projects were fun (and completely unexpected) tangents to the original goal, which is still in the works. It has morphed somewhat from its first blueprint, but the objective is still the same: a compact personal flying machine with no cockpit.